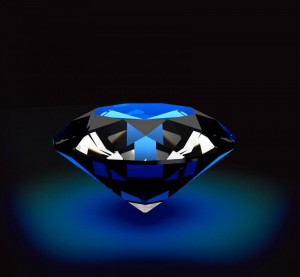 Diamond shopping trivia doesn’t end at the 4 C’s- clarity, cut, color and carat. There is more to it then you might think. Though these 4 C’s are extremely crucial at making an informed diamond purchase decision however, even the most confident and knowledgeable get confused when they see the term ‘Fluorescence’ on the diamond grading report. The good news is that fluorescence has no significant effects on the value of the diamond, having that said it is important that you should have a good knowledge about it so that you can make your purchase with confidence.
Let’s take a closer look at the term ‘Diamond Fluorescence’ and learn more about it:

Diamond fluorescence can be best described as the diamond’s tendency to release a soft-colored glow when it is subjected to UV (ultraviolet) light. In other words, it is the glowing effect that the UV light has on the diamond. Please note, that 95 percent of the time, the fluorescent glow is blue in color however sometimes it can be yellow or green, but that is very rare.

According to GIA researchers, fluorescence has no major or widely noticeable impact on the appearance of the diamond. And that fluorescence diamonds have the same integrity as those diamonds that have no reaction to ultraviolet rays. Though submicroscopic shifts and substitutions in the structure of the diamond can result in fluorescence but it doesn’t inherently weakens the diamond and neither it is bad for it.

There are two things that you should know about fluorescence, first that diamonds that fluoresce blue look whiter in daylight and those that fluoresce yellow look lower in color when exposed to UV rays, and second that diamonds that exhibit strong fluorescence have an oily or hazy appearance even in regular lighting conditions which can sometimes affect the value of the diamond negatively.
Although, fluorescence has no significant effects on the purchase of a diamond and it is a personal choice whether to buy a diamond that glows however, to ensure that you make a good purchase without any dissonance it is nonetheless advisable to exercise precaution in buying diamonds with strong fluorescence. Also make sure to focus on factors like the cut of the diamond because it can have more influence on the color of the diamond in comparison to fluorescence.

Upgrade your diamond or diamond ring to a bigger size, better color and clarity, overall you will be upgrading to a nicer diamond.

We accept certified stones and non certified. You will receive a credit for your diamond or diamond ring that may be put towards your new purchase.

We accept diamonds in any condition. If you are looking to upgrade or sell your diamond in NY, please come to our office to have your diamond evaluated.

JBE Diamonds Inc is located at Midtown Manhattan in the heart of the diamond district, between 47th and 48th Street. near all subways and buses.

Sell Your Diamonds in NYC - Best Payouts for Diamonds

JBE Diamonds is the most preferential diamond trading partner for everyone who wants to sell diamond in NYC. This long and successful industry track record well compliments with our relentless belief in diamonds and their ageless attributes. This gets evident in every deal we execute - whether you want to buy or sell GIA diamonds. Your decision to sell a diamond might be circumstantial and reasonable, but we make sure it isn't irrational. The moment you think to sell your jewelry, call us.

About Us | Our Collection | Diamond Inventory | Engagement Rings | About Diamonds | Cash Quote | Upgrade Service | Contact Us | Our Policy | Sitemap
Copyright © 1999-2018 | JBE Diamonds Inc | ALL RIGHTS RESERVED.
Exploring Different Shapes of a DiamondBlog
Diamond Color- All You Need to KnowBlog